Each duck had a tag attached; which not only told the finder its name, but also directed them to the Little Yellow Duck Project. The Little Yellow Duck Project was created by Emma Harris, in memory of her friend Clare Cruickshank on April 15th 2014, exactly one year after her dear friend died. Clare had the genetic lung disease Cystic fibrosis, her lungs had become so damaged that a double lung transplant was her only chance of survival – sadly a matching donor was not found in time. Clare had asked her Mum to ensure that she donated any organs and tissues she could after her death; and due to her generosity her corneas gave two young adults the chance to see again.

Clare had a love for both crafting and yellow ducks, and it is this that inspired Emma to set up the project.

“Each handcrafted little yellow duck gift aims to spread a little happiness to its recipient and a little awareness of how we can each follow Clare’s example in saving or transforming the lives of others through blood, bone marrow, organ or tissue donation.”
(www.thelittleyellowduckproject.org/the-story)

It is hoped that the finder of each duck will register it on the project’s website; as each duck is named, the crafter of the duck can then easily locate it on the map. Since the project began, there have been 3,214 ducks registered in 63 countries – and the map is updated daily. Not all the ducks are registered, however it is believed that around 10,000 ducks have been released as about 1 in 3 are reported. Even though many ducks may not be registered, the project has received reports that these are very much appreciated and the message behind them discussed and shared. April 15th was chosen as Yellow Duck Day 2015, as it was exactly one year after the project was set up.

Our member Lesley Guppy had come across The Little Yellow Duck Project while researching into the WI’s 2014 resolution on Organ Donation.

“The NFWI notes that three people die every day whilst waiting for an organ transplant. We call on every member of the WI to make their wishes regarding organ donation known, and to encourage their families and friends, and members of their local communities to do likewise.”
(www.thewi.org.uk/campaigns/current-campaigns-and-initiatives/time-to-talk)

By taking part in the Little Yellow Duck Project, Bognor Regis WI are supporting the 2014 Resolution by raising awareness of organ donation in our local community.

Lesley photographed each duck as it was released and announced it on social media, on both Bognor Regis WI’s and the Yellow Duck Project’s Facebook pages and Twitter feeds. 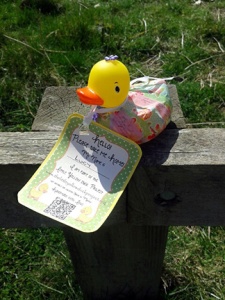 The first duck ‘Lucy’ was left by the duck pond in Hotham Park – although not yet registered, this duck has appeared on Bognor Town Council’s Facebook page and their Twitter Feed. 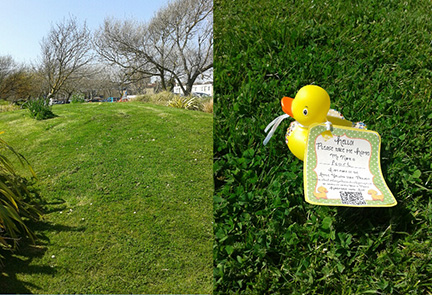 Our Second duck ‘Pearl’ was left on the Seafront mounds – she has not yet been registered.

RedShirt, our third duck, was left on the seafront looking out to sea. This little duck has not yet been registered on the map.

Henrietta was left outside our meeting Hall – she has yet to be registered. 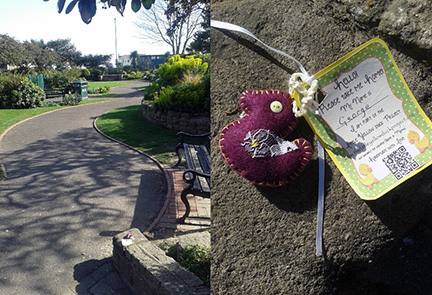 George was left in the Sunken Gardens near Bognor Health Centre – he has been registered on the map!

Left outside our local library, Jemima was not initially found – so the following day was re-released inside the library. She has not yet been registered.

This little duck, Duckular, was left outside Bognor Regis’s famous Ice House – he has been registered on the map! 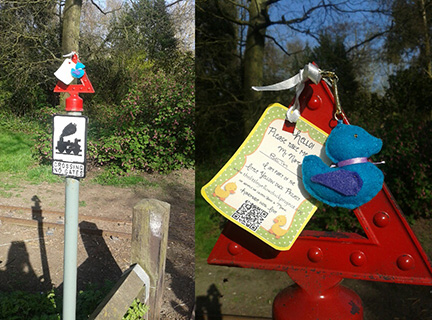 Beth, our last little duck, was left where the journey began in Hotham Park – she has not been registered yet.

Lesley will keep checking the map in the hope that some more of our ducks will be registered. She is also now in contact with Emma Harris, the founder of the project – and it is hoped that Bognor Regis WI can continue to contribute to this inspirational project.