For those who didn’t manage to get to our September meeting last week, you missed a good night.

Our main speaker, Tony Harris, arrived in the guise of Sherlock Holmes – hat, magnifying glass, pipe – and rather out of character wearing a pair of green gardening clogs !

He was an amusing speaker, even though his subject was the brutal murder of 4 ladies of the night in the East End of London during Victoria’s rein.

He set the scene very well with a description of the disgusting streets in those days, daily murders and drunkenness.

After describing the details of the murders, the clues, and the suspects his theory was that Jack the Ripper was Prince Albert, grandson of Queen Victoria … must be right if Sherlock Holmes says so!

After tea, we had a great talk from Katie Lyne  …. let her tell you all about her trip to Essex in her own words … 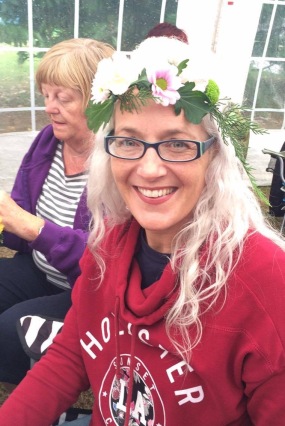 “After missing out on tickets for the WI camping weekend – Tea and Tents 2016 – in the spring, I was invited to come along to the TWICE Camp (The W I Camp Essex).  I purchased my £40 ticket and forgot all about it, until two weeks before and then asked myself what on earth was I doing? I don’t particularly like camping, I’ve never been to Essex and I didn’t know anyone going! The anxiety started to kick in!

The journey to Gosfield Lake resort (in the heart of rural Essex) on a Friday night was pretty terrible and I arrived late (having missed the retro hair and make up bonding session, and the decorate a jar workshop).  However, I was welcomed with open arms by Wings WI and quickly grabbed the last bit of BBQ and got my tent up (with help from Wings).  Friday evening’s entertainment was a quiz, so armed with a camping chair, lamp and a few glasses of alcohol, I was ushered into the communal tent and thrown into a team. Our team were the “Magnificent Seven” and after about ten rounds of various questions including the WI, The Olympics, music, acronyms, riddles and Essex (obviously I couldn’t help on that one!) We came second after a fantastic evening, full of laughter and silliness. Lights out was at 11pm, so at around midnight, we all wished each other a good night and went to bed.

Unfortunately on Saturday morning the skies were grey and it drizzled with rain. However it didn’t dampen spirits and some of the ladies went water-skiing and on a banana boat on the lake. My first workshop of the day was flower crowns, followed by a felt bird sewing workshop. Other workshops on offer were bracelet making, picture making, crocheting flowers and book club (where they all discussed a book they’d read before the weekend).

We had speakers from “Buddy Bag” a company who distribute bags of toys, toiletries, underwear and pyjamas plus a teddy, given to children in refuges (usually taken from their homes with only the clothes on their back). Another young lady talked about her charity that aims to give sanitary products to homeless women on the streets. Other talks were on fibromyalgia, make up, food banks and keeping chickens! In the afternoon we had a burlesque workshop with one of the famous 350 strong New City Girls burlesque sub group.

There was a Chocolate cake and Victoria sponge competition and after the winners had been announced, we all enjoyed eating them – with a cup of tea. We finished Saturday evening with a curry, cocktails and a singsong.

Sunday morning was much brighter and a few of the (madder) ladies had an early morning open water swim. This was followed by yoga next to the lake, which was just idyllic, hot and beautifully peaceful.

We all got together late morning for the announcement of the competition winners of best tent, best decorated bra (which I won) and the official photo call followed by a final rendition of Jerusalem before we all packed up our tents and headed for home.

I had spent two days under canvas in beautiful surroundings; in both rain and shine with about 60 ladies I had never met before, of all ages and from different walks of life. It was such a liberating and wonderful experience. The warmth and friendship shown to me was humbling and I definitely had a lot of fun, made some friends for life and learnt a few more crafty tricks!

I cannot wait for next year!”