On Tuesday 25th October 2016, I attended the 97th West Sussex Federation Annual Meeting in Worthing. As delegate for BRWI I voted on behalf of our members and was witness to the meeting. The AM was chaired by Yvonne Price, elected Chairman of WSF.

The meeting began with Worthing’s Town Cryer – Bob Smytherman, ringing his bells and declaring (very loudly), the arrival of Worthing’s Town Mayor Cllr Sean McDonald. After a warm welcome and the singing of Jerusalem; we were briefly entertained by a dozen WI members in fabulous garb reminding all present of the wonderful wardrobe we are lucky to have at North Lodge, WSF Headquarters. Members were then asked to put their phones on silent and Yvonne told members that three of the delegates were going to be tweeting throughout the meeting – I am proud to say I was one of them (!), we all used the hashtag #WSFWIAM16. During the day I was retweeted by Worthing’s Town Cryer, NFWI, WI Life, Renaissance WI and others.

Then followed a short address from the Mayor of Worthing, who although he started by saying he was nervous to address a hall of inspiring women, he spoke of his fondness for the WI as he missed a morning of school as a young child due to accompanying his mother to a WI event!

The business section of the AM then commenced with delegates voting for the adoption of Standing orders, the Appointment of Tellers and the Adoption of WSF Annual Report. I voted in accordance with my WIs wishes.

The Federation Treasurer Janet Melvin, then presented the Accounts, she gave thanks to Linda and Jane who assist her. It has been a good year for Federation Funds. She reported last year money was spent on North Lodge, a Grade II listed building, to replace the heating in the house. This year the heating was replaced in the flat above which is rented out. The building is currently in good repair having had work carried out to the roof and the walls of the heritage room; she thanked the North Lodge Management Committee for their hardwork.

Money was spent on Centenary celebrations, which many members were able to take part in. The 300 club is still doing well; but savings in charity saving accounts are not as profitable as hoped.

The Financial Accounts were proposed and accepted.

Then followed from Yvonne, her Chairman’s Report of the Annual National Council. West Sussex were invited to welcome the meeting and encouraged those attending to ‘have the will to embrace change’. WSF was then one of a few federations invited to share their success stories.

This was followed by the Chairman’s Address, Yvonne encouraged us to use and seek out the opportunities in our WIs. ‘Take up the challenge – you don’t know where it will take you!’ Yvonne & Gill (Chairman of ESFWI) then spoke about plans for the Centenary of the Sussex Federation in 2017 – a joint event between ESF & WSF on the 5th September 2017, exactly 100 years to the day and in the same place where Lady Denman and Madge Watt started the Sussex Federation. There are also plans to celebrate our WI heritage with the BoT applying for a blue plaque in Balcombe for Lady Denman. The BoT are also working on plans for WSF Centenary in 2019.

Members then applauded the many WSF WIs which are celebrating special birthdays this year and welcomed the newest WIs in West Sussex – including our neighbouring WIs: Icing on the Rocks WI, Aldwick Revival WI and Felpham Fillies WI.

The first guest speaker of the day was then welcomed to the stage – Melanie Gibson-Barton ‘Wandering on the Somme’. Melanie was keen to point out that she is not a historian, just interested in Belgium (she has a 2nd home in Bruges as her husband is from Belgium and they spend most weekends there). What followed from this WI member was a powerful, informative and moving talk. After speaking to the Folkestone Historical Society a few years ago, she offered to work with them to locate WWI war graves. So far she has visited 85 cemeteries throughout Europe. She takes photographs of the specific grave she is looking for, and records the location so that family members can later visit and pay their respects. She said it felt like ‘bringing them home’. She spoke about the background to WWI and many of the battles that took place. It was hard to believe that she is not a historian, as she was so well informed and passionate about her subject. She enthralled all with her talk and photographs of the many battle sites and cemeteries she has visited.

During the lunch break, WI members from across West Sussex took the opportunity to look at the Centenary Scrapbook – which I am delighted to report we appear in a more than once or twice! 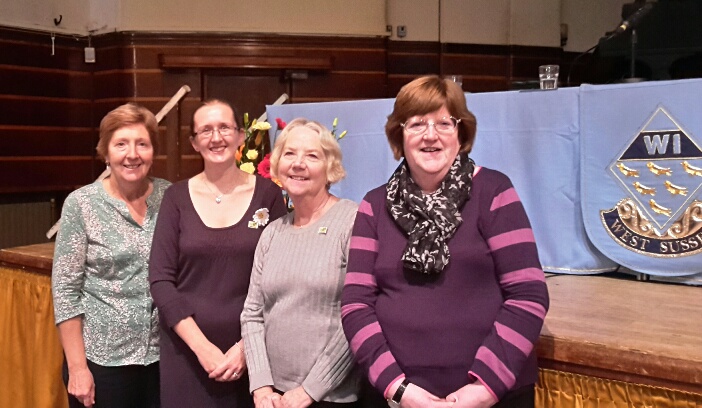 Our members, Celia, Angela, Sue and myself also took the time to chat to WI members from other WIs and share ideas. I also had the opportunity to meet and chat with NFWI Trustee Jane Probitts, the third invited speaker for the day.

The first speaker after lunch was John Benjamin of BBC Antiques Roadshow Fame. His talk Romancing the Stone, began with John explaining how he came to be a jewellery expert for the Antiques Roadshow – which can see him examining 1200 pieces of jewellery in one weekend! He had an unhappy childhood, due to a stutter he was bullied and lonely. And when he left school at 17 he didn’t know what to do, except that he was sure he wasn’t going to go into the family business of fashion knitwear! In desperation his family sent him to a careers advisor in Harley St, London. After a few surprising questions the advisor declared that a career in gemology was for him – John was not convinced but his father was, quickly lining him up an interview for Cameo Corner. They wanted a girl but interviewed him anyway – presenting him with a tray and asking him to identify the precious stones. John instinctively knew which was which, was quickly hired and began a course in gemology. After 4 years John left and went to work for an Auction House – for 22 years he examined some of the most precious jewellery that came to auction from around the world. In 1999 he set up his own company, and through a friend was recruited to the Antiques Roadshow. John spoke about his experiences as an expert – commenting that most attendees don’t bring one or two pieces but sometimes 30 or more – and he has to see each one. He said you never know what surprises may be discovered and that it was the reaction to his examination that often resulted in the greatest television moments rather than the pieces themselves.

The final speaker of the day was Jane Probitts, NFWI Trustee and Chair of the Craft Committee. She spoke about her life – her wish as a child to be a scientist, just so she could wear a white coat! She studied chemistry at university and her first job as a forensic scientist was examining and studying illegal drugs. Looking for a career change she went into the pharmaceutical industry developing new drugs. Jane has always had a love of sewing, probably due to the fact that four of her Aunts ran a haberdashery. Her love of quilting and patchwork drew her to the WI which she joined 20 years ago. She never expected to end up on the National Board!

Jane then showed us the new NFWI presentation celebrating the WI – telling us that we were the first to see it. It was lovely to look back on so many Centenary Celebrations and see why the WI Inspires Women.

The meeting closed with the singing of the National Anthem.

I had an extremely enjoyable day, thank you BRWI for selecting me as your delegate.