Four of our intrepid members, undaunted by the the rigours and dangers of distance, travelled to the Chichester Festival Theatre on Sunday the 25th of February. Their mission, should they accept it, was to witness Major Tim Peake CMG being presented with the Freedom of the City.

Cold as it was outside the theatre, the atmosphere inside was as exciting and electric as a solar flare. Whilst in the cafe having tea and cake (very WI) we spotted a man in a very fetching space themed waistcoat and a chain of office round his neck. We asked if he would have his photo taken with us , he accepted and he turned out to be the Mayor of Bognor Regis!! 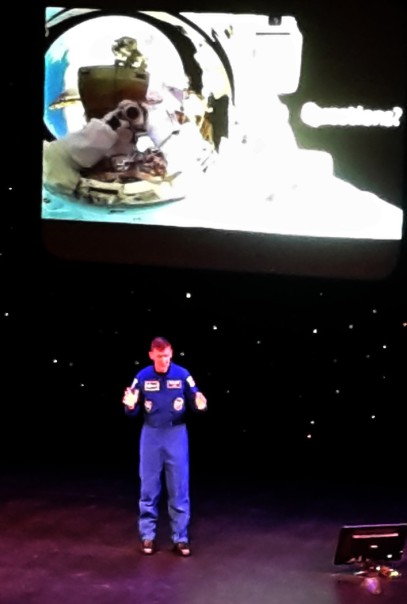 The ceremony started with the arrival of the mace and the introduction of the civic party.  The Mayor of Chichester provided a very amusing opening to proceedings before Major Tim collected his prestigious award. After an interval, when he changed into his ‘working gear’, he enthralled everyone by recalling technical details and the living conditions he experienced during his six month stint at the International Space Station. He amused everyone with his humorous delivery and afterwards answered questions from children in the auditorium.

At the end of the presentation the audience packed into the theatre entrance where as many as possible had the chance of shaking hands with this amazing first Brit to live in space on the ISS.

Everyone agreed a wonderful time was had by all.