RESOLUTION, SWISHING AND LOOKING FORWARD TO A FUN FILLED SUMMER 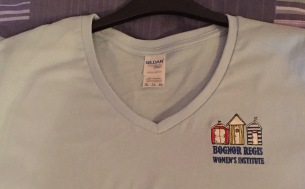 President Dinah Barrand welcomed members and two visitors to the May meeting while sporting (as were all the committee) one of the new BRWI teeshirts with the distinctive beach huts logo. The teeshirts have been designed and commissioned by Katie and are available to all members for £7.50.

Committee Member Gina Fitch-Roy gave a talk on the scale of the problem and some of the arguments both for and against the proposition. The following is from a briefing paper issued by NFWI.

Each year, around 1 in 4 people will experience a mental health problem and almost all (9 out of 10) will face discrimination and stigma including from friends, family and at work. This can worsen someone’s mental health problems and delay or impede their getting help and treatment, and their recovery. The Mental Health Foundation estimates that around 1 in 10 children and young people are affected by a mental health condition such as depression, self-harm and eating disorders. However, 75% of people with mental health conditions do not have access to the care they need. Research also suggests that access to services and waiting times can vary significantly depending on where you live.

In 2011, the Government set out a strategy to improve mental health and wellbeing, ‘No Health Without Mental Health’. This was shortly followed by a strategy for mental health and wellbeing in Wales. In April 2013, the Health and Social Care Act 2012 came into force, enshrining the strategy for England into law and introducing an explicit recognition of the Secretary of State for Health’s duty towards both physical and mental health. This Act placed a legislative requirement on the health service to address the disparity between mental and physical health through a concept known as parity of esteem. Parity of esteem recognises that mental health impacts on physical health, and vice versa, and therefore they should both be treated together and equally. A key aspect of implementing this parity is an equal distribution of resources, as well as equal consideration given both aspects of health when commissioning services. Mental health services were given a boost in the 2015 coalition government budget when the Deputy Prime Minister, Nick Clegg, announced he had secured £1.25bn to enable the NHS to treat more than 100,000 young people by 2020. The announcement built on Clegg’s 2014 announcement of the first waiting-time standards for mental health treatment and £120m funding for service improvements designed to put a stop to ‘discrimination against mental health’.

Since then, the Government has continued to take action to tackle the stigma associated with mental health and improve the provision of mental health services. In January 2016, the Prime Minister announced investment of £290 million in specialist care for new mums, £247 million in mental health services in hospital emergency departments and £400 million in community-based services. This was followed by the announcement in January 2017 of a package of measures, targeted at schools, the work place and local communities, to ensure that children and young people receive the support they need for mental health conditions. These included:

In July 2017, the Health Secretary announced plans to create 21,000 new posts in mental health services in order to treat an extra 1 million patients by 2021. However, the NHS Confederation and Royal College of Nursing have raised concerns over whether there is enough time and funding to deliver this. Campaigners have also warned that local authorities are not spending enough of their public health budgets on mental health services. On average, this is less than 1% according to figures obtained by Mind. A number of local and national campaigns have also been launched aimed at breaking down the stigma associated with mental health and encouraging people to talk about their experiences. These include Time to Change and Heads Together.

Arguments for the resolution

Arguments against the resolution

The meeting then split into small groups to discuss the issues and to share views and, during refreshment time, members had the opportunity to cast their vote either for or against the resolution.

During refreshments the garments that members had brought in for ‘swishing’ were unveiled having been sorted by size. For each item of clothing donated, a raffle ticket was given which could then be exchanged for ‘new-to-you’ clothes.  Members were invited to browse before the start of swishing was signalled by the ringing of the President’s bell.  In the absence of a mirror, members were dependent on the honesty and critical judgement of their fellows!  In the event most garments were exchanged – happy members and less discarded clothes destined for landfill!  Result!

During this time, Katie also demonstrated the dress code for the forthcoming Bognor Carnival where BRWI will be entering with a theme of Calendar Girls.  She and Dinah both modelled the different types of sunflower accessories which could embellish the black dresses/teeshirts.

Our selected charities were not forgotten – More very colourful twiddlemuffs were brought to the meeting for Bognor Hospital, and Jeanette brought in a marvellous selection of bedding for Stonepillow.

At the end of the meeting, the results of the Resolution vote were announced with a majority voting for the Resolution, and also voting to allow a discretionary vote to the Delegate.

The competition this month was for a VE Day flag and this was won by Sarah Greenaway’s splendid jigsaw with Karen McCreedy and Annie Smith sharing second prize, Annie with a 3D collage including a number of national flags and Karen with a stitched Union Jack flag exhorting God to Save the King.

Well done! Next month’s competition is for the most lovely home grown sunflower and seeds were given to members to start the process.

The meeting drew to a close with Dinah wishing all members and visitors a safe journey home.