Debbie Brooks, having spoken about the money raised by Sylvia’s tea party, then introduced Jane Ramage, a Trustee of the Friends of Chichester Hospital who presented a formal Certificate of Appreciation for the monies received. Jane then described the equipment for the colo-rectal unit it had helped to buy; an insufflator that will greatly assist the surgical teams and improve patient outcomes.  She then gave an interesting insight into the general work of the FoCH, how funds were raised and the equipment it allowed them to buy.

A short break followed when members were invited to browse the display of photographs that captured the high points of the year,  look at the list of candidates for election to the Board of WSFWI trustees, Guess the Weight of cake, vote on the competition entries and sign up for future activities. 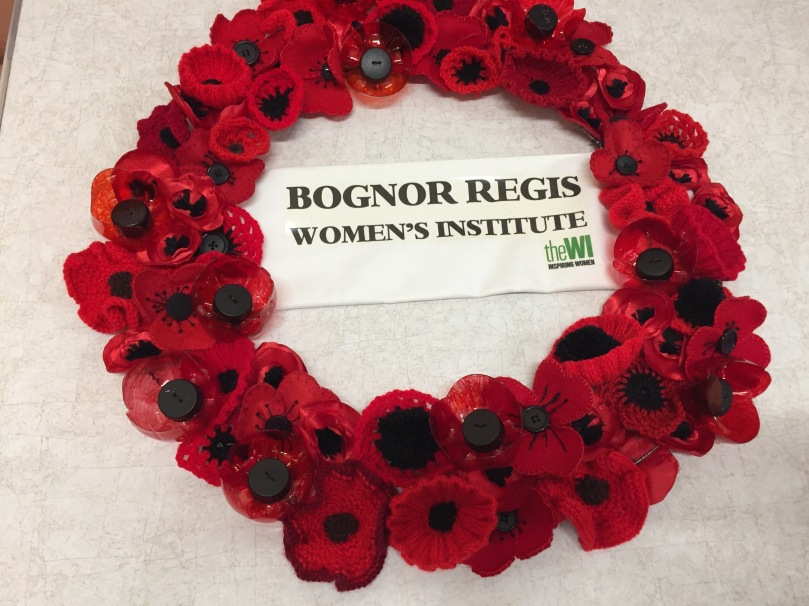 The formal part of the meeting commenced with the singing of Jerusalem followed by the approval of the minutes of the September meeting, the demonstration of the poppy wreath beautifully made by Katie with the various poppies made by members and a vote on the adoption of the BRWI logo (unanimous). Dinah then spoke about the proposed move from the Methodist Church Hall to the Gordon Centre outlining the reasons why this had been considered and the advantages it would bring. The downside would be the change of meeting date from the second to the third Tuesday in each month but having listened to the case for a move, members voted overwhelmingly for the change of venue.

An invitation was extended to two members to attend Tangmere WI’s 29thbirthday celebrations.

The Financial Statement having been read out, proposed, seconded and approved the members were then treated to the Committee Report which gave a witty overview of activities over the past year:

A   is for Arty Afternoons at Lynn’s – from colouring in to entries for the County show. Lynn shares with us her love of art and her yummy cake. A is also for the Arundel history walk led by a postman, organised by Celia and enjoyed by 12members.

B   is for our 2 Book Groups organised by Flo and Celia – a library of books have been read and we’re hoping to do some joint events next year.  It’s also for our Back to School Summer Social – we enjoyed reliving our school days at the Rowland Rank

C   is for our part as Calendar girls in the Bognor Carnival – it was great to take part in a community event. It’s also for the Chichester Canal trip back in March and the Competition cup – last year’s winner was Karen.

D   is for the Desert Island Discs themed members meeting, which took place in July instead of April. Thanks to members who shared their ideas of a ‘must have item’ and to Sue for hosting members on her island. D is for the drama group ‘Acting Up’ possibly the shortest-lived sub group but thanks to Jan for trying.

E    is for the Eating Out group organised by Lesley. Many meals have been enjoyed in a variety of restaurants and pubs

F    is for Flick Chicks Cinema visits organised by Karen. F is also for the lovely Fundraising Tea in aid of St Richard’s Hospital in Sylvia’s garden and for the Flower Festival in Chichester cathedral where Sheila managed the WI display.

G   is for the Gin and swim evening at Gina’s in July. It was a great success and hopefully to be repeated next year as ‘Pimms and a paddle’ to include those not so keen on full immersion in the sea.

H is for Hawks. In June we enjoyed an evening in the company of many different Birds of Prey. They seemed at home swooping around the hall and landing on unsuspecting members heads. H is also for our homeless charity – Stonepillow –a big thanks for all the generous donations.

I    is for the inspirational talk about Suffragettes by Diane Atkinson at Denman based on her book ‘Rise Up, Women’ that 5 of us went to on a snowy day in February.

J   is for Jan’s Walks, which many of us have enjoyed throughout the year. It’s also for Jam, cake and crafts for Hotham Park Country Fair stall in August. A big thank you to everyone who donated so generously and helped on the stall.

K   is for Knitting. Whether it’s enjoying the Knit and natter group organised by Rosemary or knitting Twiddlemuffs for our charity Friends of Bognor Regis Memorial hospital.

L    is for Summer Lunch at Lynn’s. On the last Saturday in June 20 of us enjoyed a delicious meal in the sunshine in Lynn’s beautiful garden

M  is for our new monthly coffee mornings in Hotham Park. A great suggestion from Rosemary.

N  is for nights at the theatre organised by Mandy. It’s also for our Nordic walking taster session in February.

P  is for the Processions event in London that Katie organised so well for us. 6 members took part in the national event put on to celebrate 100 year anniversary of the Representation of the People Act.  P is also for poppies – over 100 crafted at our September meeting

Q   is for Quiz Nights. A record 5 teams took part in the Federation Quiz in August and we had a winning team. We’re looking to forward to our Quiz on Friday

R    is for the screening of the Royal Wedding in Hotham Park, the sun shone and the fizz flowed.

S  is for the Swishing event at our May meeting which supported the 2017 Plastic soup resolution – trying to reduce the amount of microfibers in our oceans. S is also for Suffragettes – 10 of us enjoyed a Walk and Talk around Westminster with Diane Atkinson and a visit to the Voice and Vote exhibition at Westminster Hall.

U is for how ‘you’ see yourself as a peg doll. A sort of ‘This is Us’ display celebrating the diversity of women in the WI. They were used to decorate a window for Christmas in the Church

V    is for the Victorian Xmas Fair at Portsmouth Historic Dockyard. A highlight of which was the carousel ride.

W   is for Wildforest Falls Adventure golf in Hotham Park in May where Debbie putted a hole in one.

Y   is for Yeeha and Howdy Partners  – we kicked 2018 off in style with line dancing. Thanks to Barbara and Alan for stepping (literally!) in when our planned Jive session was cancelled. Another Y was Yes to the 2018 resolution ‘Mental Health Matters’ at our meeting in May.

Z   is for Zip Wire, abseiling, archery and much more at the Women Go Wild camp in June. A memorable weekend where new activities were tried, new friendships made and old ones strengthened.  We certainly hope to have another camping trip in 2019.

The President’s Report followed and was warmly received, and in the subsequent vote for this year’s President, Dinah was unanimously elected to head the new Committee of Joyce Aird, Debbie Brooks, Kate Claisse, Katie Lyne, Gina Fitch-Roy, Barbara Foster, Sarah Greenway and Sue Harris. Warm thanks were offered to Celia Janering and Jeanette Clark who step down this year after years of sterling service.

The winner of the competition for carving a vegetable was announced with Annie Smith in first position and Jack Owen in second and the Guess the Weight of Cake competition was won by Gina, who was presented with a delicious mini cake by cake baker extraordinaire Jack, with Gill Lowden a close second. 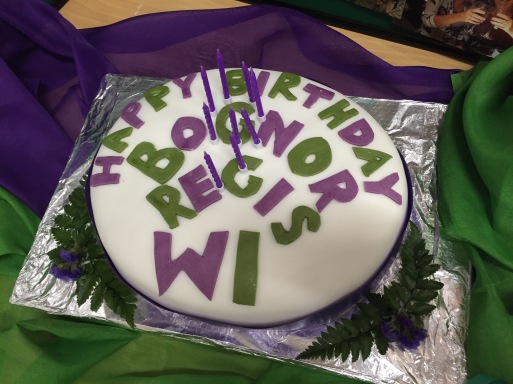 After a hearty rendition of ‘Happy Birthday’, the beautiful cake in Suffragette colours and decorated with nine candles (is it really nine years since the start of BRWI?) was then cut and thoroughly enjoyed after hot dogs, tea and coffee.

Just enough time was left for Dinah to wish all members a safe journey home.