Skip to content
OYEZ, OYEZ, OYEZ!! “Greetings to the lovely ladies of Bognor Regis WI and God save the Queen!”
This was the stentorian greeting to the 50 Members and one visitor to BRWI, from the speaker; Jane Smith, Bognor’s own town crier.

In full regalia and sporting the crests of both Bognor Regis and the Ancient and Honourable Guild of Town Criers, Jane gave a fascinating insight into the history of town criers, the various duties of the town crier and, two years into the role, her own experiences. Having explained that it was illegal to heckle a town crier and also an offence to harm a town crier – the penalty for the latter being death – Jane addressed a very well-behaved audience!
Believed to date back to 7BC, the main qualification for the job was to be literate as they had to pass on proclamations, news and messages as they travelled on horseback from village to village. Jane gave a number of interesting snippets about town criers one being the fact that they feature on the Bayeux tapestry and another that Edward the Confessor was carried to his funeral by two ‘bellmen’ (criers) and that is where the phrase ‘dead ringers’ comes from.
The meeting was told that town crier qualifications now include a voice of good volume, diction and inflexion and that there are some 200 town criers in the UK, some employed by town councils and some self-appointed, of which 10% are women. With a background in amateur dramatics, Jane described her own appointment as town crier and the events and functions which she has attended including a number of town crier competitions.
A warm vote of thanks was given by Katie who noted that it was always good to have a positive example of ‘girl power’.

mde
After refreshments, including 6 delicious cakes, the Easter themed raffle was drawn and the competition winners announced. 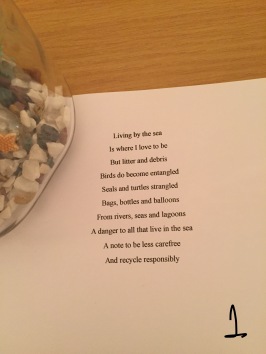 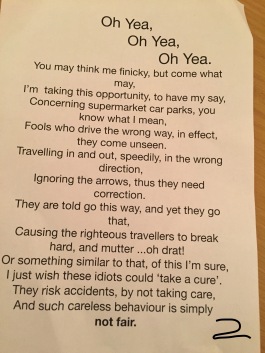 dav
The competition ‘Something to Shout About’ was judged by Jane Smith, with Chris taking first place with her poem and arrangement on the horrors of plastic pollution, and Annie snaffling second with a poem about the irritations of bad driving behaviour in the supermarket carpark.  Jack took third place with one of her old school reports; it was encouraging that her trampolining skills were much improved!

President Dinah brought the evening to a close, thanked everyone for their donations for Bognor Regis food bank, and milk bottle tops for Sage House, and wished all members a happy Easter and a safe journey home.
Words:  Gina Fitch-Roy
Photos: Katie Lyne and Kate Claisse
To view a record of the meeting, please click here …
Record of April 19 meeting