This meeting record is rather late – as our next meeting is on Tuesday!  My only excuse is that Gina wasn’t there so I didn’t get one of her superb and super-fast (next day!) reports.

Our speaker at the September meeting was Trish Johnson, who is a British Sign Language (BSL) tutor working in and around Bognor Regis.  She is studying for her BSL LEVEL 6!

Trish gave us some background into sign language, including the fact that it had only been recognised as a language since 2003.  What was a surprise to me was that BSL is truly a language with grammar, syntax etc.  Other countries have their own distinct sign language, quite different in each country – American and British sign language is not the same.

She showed us finger signing and we learnt the alphabet and how to spell out our names and some basic word signs.  She also showed us that the language includes not only finger signing but the use of the face to show emotion.  It was a very interesting talk and we certainly learnt a lot! 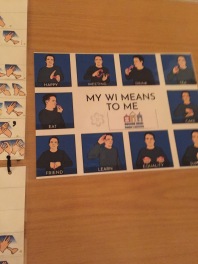 As the competition was sign language related, Trish was asked to judge it and the results were …. 1st Annie,  2nd Chris Hunter  3rd Karen

Other news from the evening … Karen McCreedy announced that her latest book (Exile), which is the sequel to Unreachable Skies,  has been launched … and Jack Owen invited us to take part in the weekly Park Run every Saturday at Hotham Park.  She assured us that no one has to run it all, and it will improve our wellbeing!

To see the full record of the meeting – click on Record of September 19 meeting.