At our November meeting, our new President Sue Harris asked each member of the new committee (or those who had taken on new responsibilities) to introduce themselves and to explain their roles.  A warm round of applause was given to Debbie, Joyce, Sarah, Kathryn, Chris and Lesley who, together with Sue, make up the ‘Magnificent Seven’ who will be steering the WI for the next year.

Sue also took the opportunity to thank Katie and Jack for their work and support at the Remembrance Parade. 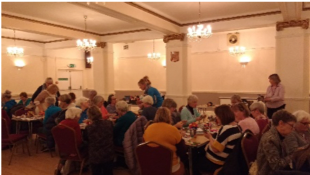 Then on to the main part of the meeting with each member and visitor being given a ‘craft kit’ containing everything needed to make three Christmas decorations. Sarah gave a brief demonstration of how to how to put together a pom pom, paper bauble and snowman and then it was eyes down for some serious crafting. It was a very creative hour – leavened by a lot of conversation and laughter – and with everyone making the decorations with varying levels of expertise!

During the refreshment break, members had the chance to sign up for a number of future activities including walks and the fundraising quiz in January. There was also the opportunity to add to the large number of Christmas food items donated to the Food Bank by members. 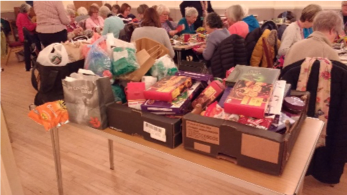 This will be the last meeting at which bottle tops will be accepted in aid of Sage House but empty crisp packets will still be collected so that they can go to be recycled into garden furniture.  (Members voted unanimously to continue to support Sage House and the Food Bank as BRWI’s chosen charities.)

After tea and coffee, the business of the meeting took place including a list of the WI Resolutions to be discussed next year and a brief report on the WSFWI AM by Lesley Guppy who attended as Bognor’s delegate. Click here to read Lesley’s report.

There was also the opportunity for Debbie, the lucky winner of last year’s £100 bursary, to update the meeting on the singing lessons on which the money was spent. She described with great enthusiasm how the individual tuition had improved both her ability and confidence when singing in the MusicSmart choir.

Looking ahead to the December Meeting, members were invited to put on festive outfits for a party style meeting with entertainment from a local flautist, mulled wine, Christmas nibbles, a committee led Secret Santa and a hidden bottle raffle. The Christmas competition (which may well be crucial in the awarding of the Competition Cup, for which a £100 bursary prize offered) will be ‘Christmas in a Hundred Words’. Thinking caps on and pens at the ready!

Sue also introduced Gina as the new Climate Change Ambassador who will be working to develop initiatives for members collectively and individually, as well as liaising with other WI Ambassadors in the local and national federations.