On the 15th December the walking netball group had their final session before the Christmas break. Tinsel and Santa hats were the order of the day and we all had an enjoyable session to finish the year (and what a year!).

The group is going from strength to strength with numbers slowly creeping up. The overall standard of play has greatly improved and players have a greater understanding of the rules. The shooting has been really impressive and everyone has been successful in scoring goals. The joy on their face when a goal is scored is amazing!

The game is always good natured and fun and I’ve immensely enjoyed the group who are full of energy and humour. Thank you all for making it all happen. We look forward to the new year with enthusiasm. Special thanks go to Sue G who does all the boring stuff like collecting money and booking the venue, and also to Manuela who religiously washes the bibs each week and brings to extra balls to the sessions. Thank you so much.

It may not be on par with the Open but Gina, Karen and Sue met for a round of  adventure golf in Hotham Park.

Competition was fierce but good natured with Karen being the eventual winner by 2 strokes and Gina and Sue enjoying joint second place.

Congratulations to Karen but also to Gina on her hole in one. This would have normally been celebrated with a round of drinks at the 19th hole but we made do with tea and coffee at the café.

The Walking Netball Ladies have now completed their second 26 challenge.

We decided to ‘run’ a marathon – 26 miles. No, we didn’t do this individually but did it collectively. Fifteen of us took up the challenge of walking, jogging or running (or a combination of all three) 1.8 miles each, recording our times and then all these times were added together to see how fast we could complete a marathon.

The weather has been glorious and most plotted a route and set out.

Barbara started us off by sending in a time the day after the challenge was launched. She managed to walk her distance on a treadmill and gave us a benchmark of 33 minutes. Some did it with a dog for company, Mandy with her horse and Gemma made us laugh by doing her distance on the beach in flip flops with two young children. Times were all very close to the 30 minute mark until Jack emailed her amazing time, for 1.9 miles, of 17.53 minutes. Not only that but a fantastic photo followed. She is our very own superwoman.

Everyone enjoyed the challenge, some even did it several times to improve their own score. Manuela managed to shave nearly 7 minutes off her first time. This was fantastic and shows how competitive the ladies are.

The overall time for our collective 26 miles was 8 hours 35.33 minutes.

Thanks go to everyone who took part and we will be donating extra items for the Bognor food bank.

Thanks again to Dinah for organising the photos, they show us passing on a wooden spoon but nobody ended up with it!

Here’s to the next one!

These bags have been made by June, Barbara, Janet and 2 friends. The first 12 went to Greenway’s Care Home.  Jan’s group is making more so each of the staff members have one each. A second batch has gone to a care home in Middleton on Sea

Words and photo from June Salter 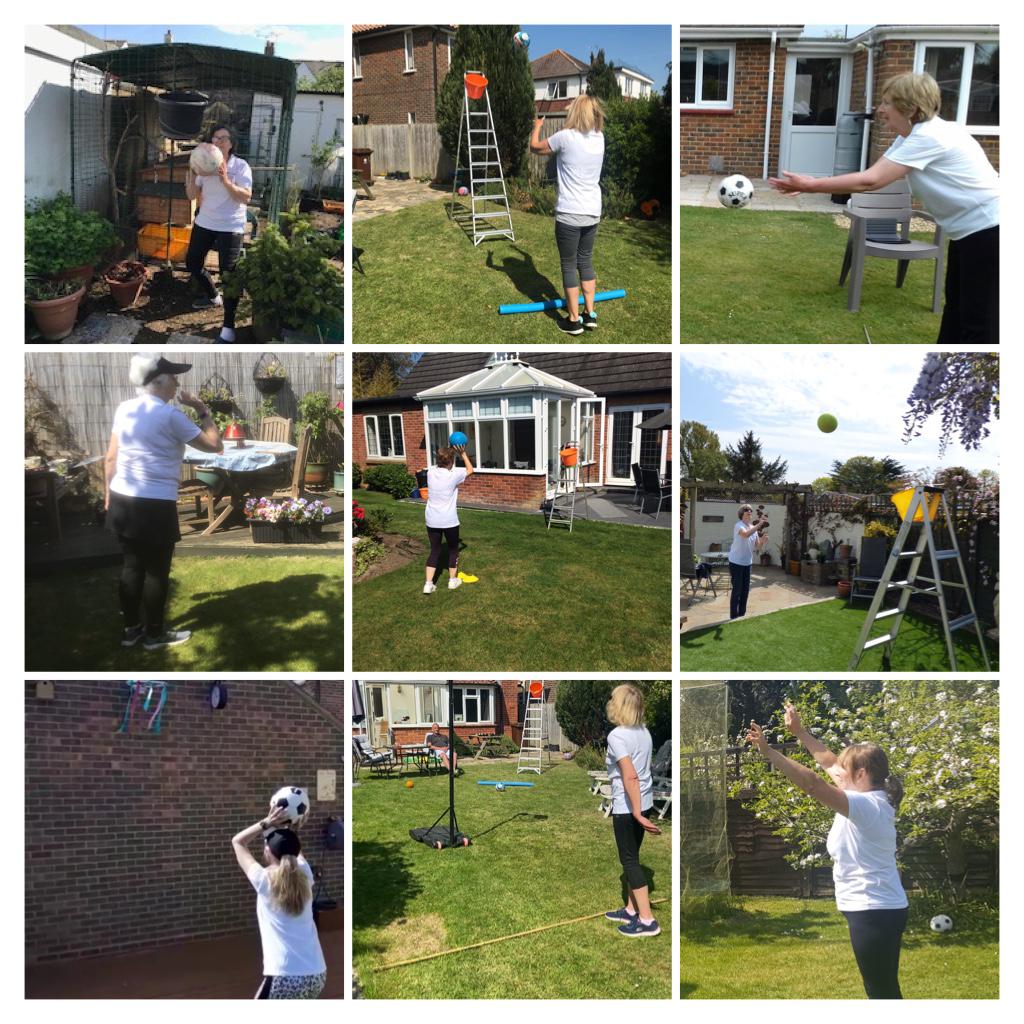 It started with an email from Dinah asking if we could do something as a walking netball group in relation to the 26 challenge.

The London Marathon had been cancelled due to the virus and therefore the challenge was to raise money for charities in a creative way and have fun doing it.

I came up with the idea of a shooting challenge for our lovely netball group and Annie, our Team Manager, launched it in her inimitable way.

The aim was to score as many goals as possible in 26 minutes from a distance of 2.6 metres. The really creative part was the goal!  Most followed a prototype of a bucket secured to a step ladder. Some had buckets which were suspended on walls or chicken runs, others had targets at ground level. Sarah’s husband even made a goal and attached it to a wall. It didn’t matter what height it was. The ‘missile’ could be any ball or rolled up socks or tea towel. It didn’t matter.

What mattered was how many you could shoot.  Of course, being of a competitive nature, the ladies rose to the challenge magnificently.

I thought I had better try this out before Sunday (Marathon day) and see if I could actually do it myself.  Bucket was securely wedged on top of the step ladder and time began.  Well, I was pretty smug with myself and scored 50 goals and set this as the target to beat! Little did I know how the ladies would respond. Scores started coming in …

It didn’t matter what the score was we all enjoyed the banter of trying to beat each other.  Some of the comments were just brilliant and I’m sure everyone had a smile on their face.  Here is a selection:

The most important aspect of the day was to raise money for Sage House. I believe we raised approximately £350. Well done everyone, it was an amazing effort and such good fun. I’m sure you’ll agree the photos are brilliant and shooting techniques were pretty good too.

My thanks go to Dinah who collated the photos, to Annie who made it happen, and to everyone who took part

Bognor Regis WI netball team continues to thrive, playing every Wednesday 6-7pm at the Arena sports hall. We’re really lucky to have the lovely Ann coaching, and attempting to teach us skills, tactics and rules.

Sarah has embroidered team polo shirts for us all.

You’re welcome to pop along anytime – Annie Smith is our organiser.