To start the BRWI Christmas Party evening on a festive note, members and guests were offered a cup of mulled wine as they arrived at the beautifully decorated Gordon Hall. President Sue Harris then welcomed members and guests from Bognor Regis WI and Aldwick Revival WI to the meeting before asking Debbie to introduce the entertainment for the evening, namely flautist Frances Benham.

A rendition of ‘Jerusalem’ helped everyone to warm up their vocal chords, and this was enthusiastically followed by a compendium of carols accompanied by Frances.  There was a hearty ‘Ding Dong’ and ‘Jingle Bells’ and magnificent ‘glorias’ rang out, putting the acoustics of the hall to the test.  There was nothing ‘Silent Night’ about it!  To hear our rendition of ‘We Wish You a Merry Christmas’ click here.

Frances judged our ‘Christmas in 100 words’ competition and the competition results were as follows: Joyce came in at 3rd place; Annie in 2nd; and Debbie took 1st place being persuaded to perform her somewhat controversial poem, which claimed her to be “a right ole misery” with all the “bother and fuss” of the festive season.  (She secretly reassures us that’s she’s not really as grumpy as she makes out!)

Sue brought members attention to the latest copy of West Sussex News where 3 of our members were mentioned in the paragraph re the County Centenary Craft Competition. 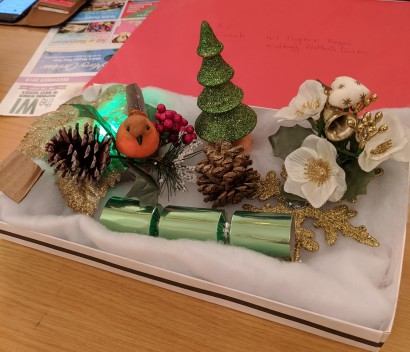 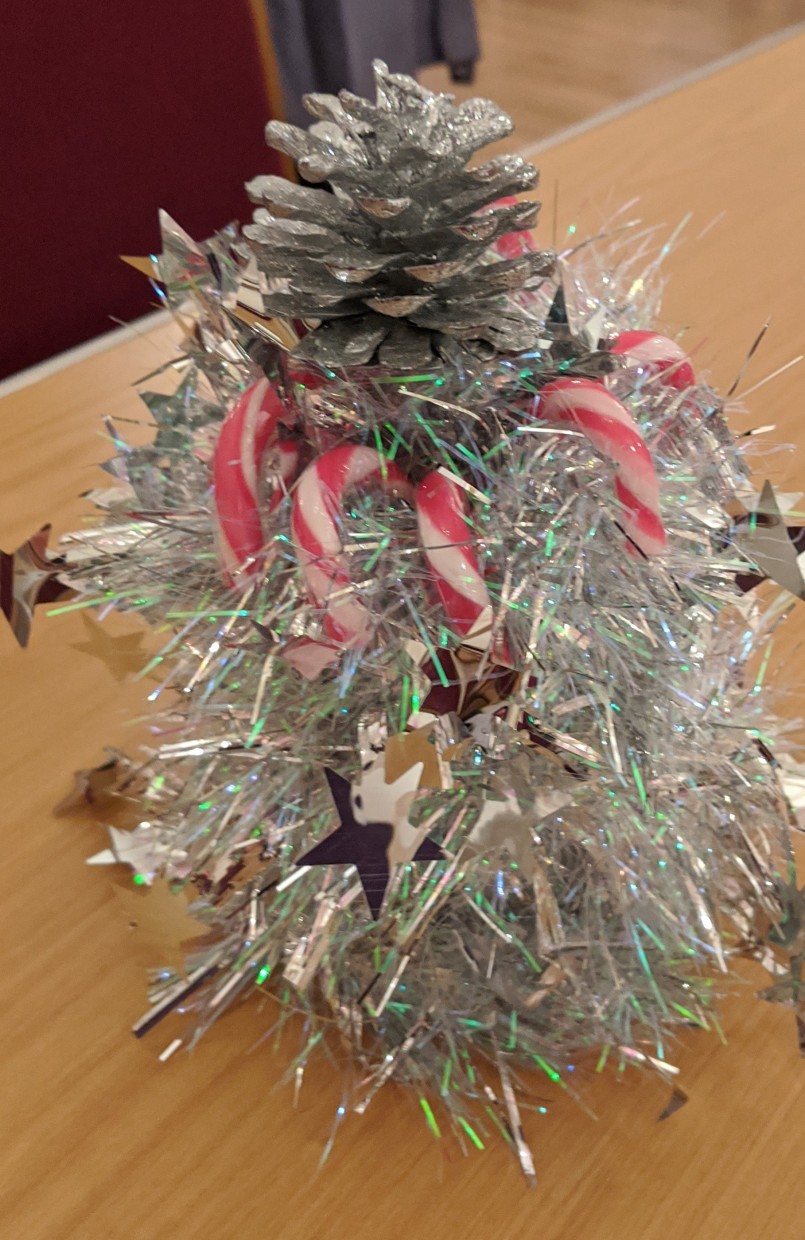 To re-energise after all the singing, platters of cheese and biscuits were served, along with mince pies and various other sweet fancies.  Each table was asked to compete in a ‘Festive Film’ themed quiz, and to also guess which committee member had made which of the stunning table decorations adorning each table.

Quizzes were scored and prizes given, and then on to Sue’s secret bottle raffle.  If you had a winning ticket you could choose a bottle bag containing a mystery bottle of… something – no peeking until it was too late! 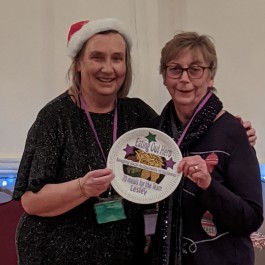 Then on to the ‘awards’ section, where special service and talents were acknowledged as follows:

Although it was a busy evening full of fun and laughter, there was just time to take advantage of a special photo opportunity, namely:

BRWI Presidents, aka The 5 Wise Women.  From left to right in ascending term order: Janet; Jan; Lesley; Dinah; and our current president Sue.

Each has brought something unique and valuable to the presidency, which has helped BRWI grow into the thriving and vibrant institute it is today.

As Sue closed the meeting with an amusing anecdote from her childhood, Party Bags and the 2020 Programme were distributed.  She gave special thanks to Chris and her team of helpers for organising the evening’s refreshments.

For those who haven’t yet received their copy of the 2020 Programme – have a peek by clicking here! 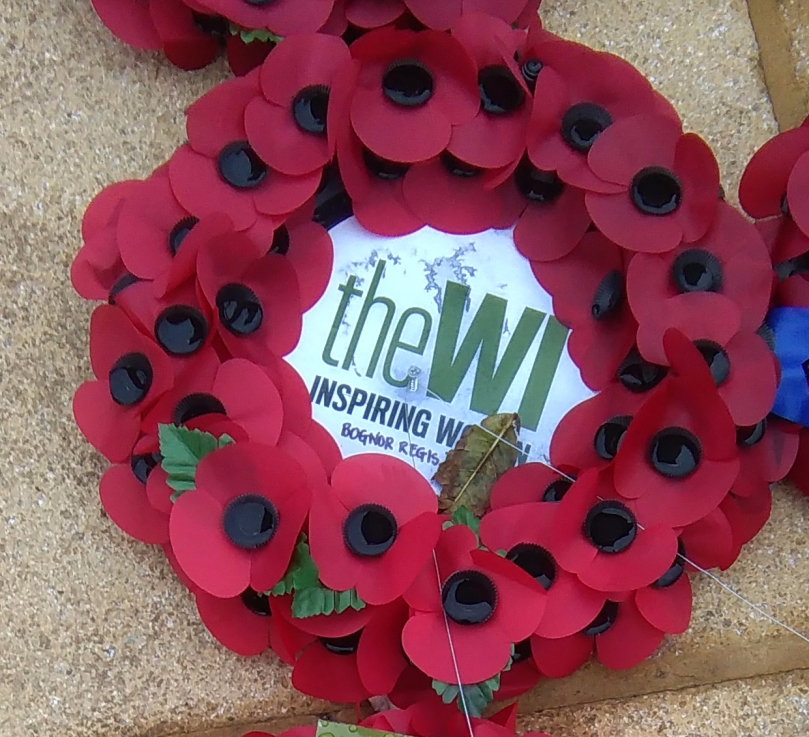 On 10 November a small group of WI members took part in the Remembrance Service at the war memorial in Bognor Regis. As our new President I was honoured to step forward and lay the wreath together with Katie who organised our presence at the service and our wreath. A very proud moment for us both. 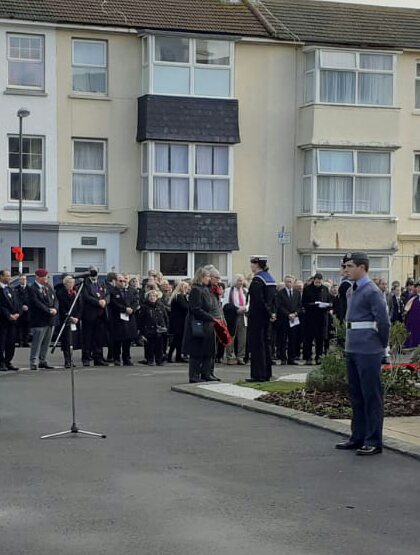 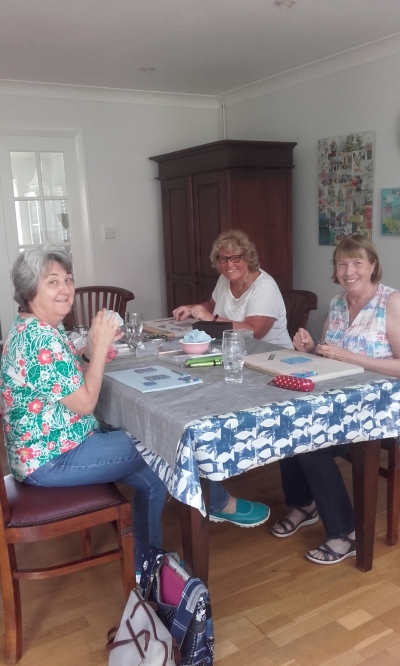 10 of our members learnt a new technique using polymer clay and extruders to make jewellery, key fobs, coasters, buttons and hair grips, in the style of Gustav Klimt. 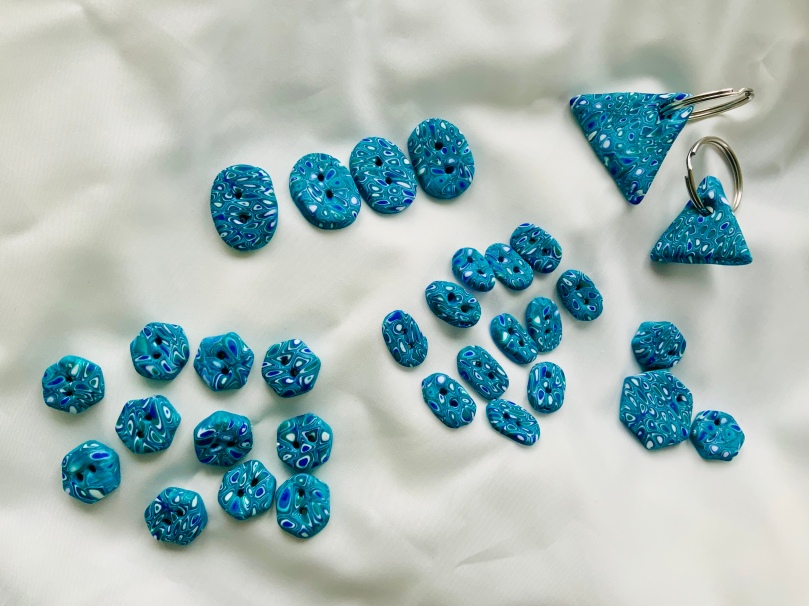 Various coloured clay sticks were sliced, put together to make a cone and put through an  extruder tool, emerging as long strips of patterned clay.   The strips were stacked, cut, and re-stacked twice.  The stack was cut into slices, massaged together and cut into the shapes required.   The combination of colours and tiny patterns melted our creative hearts, and we all fell in love with the technique. 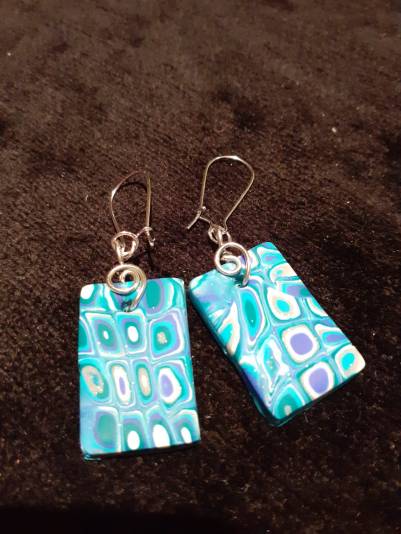 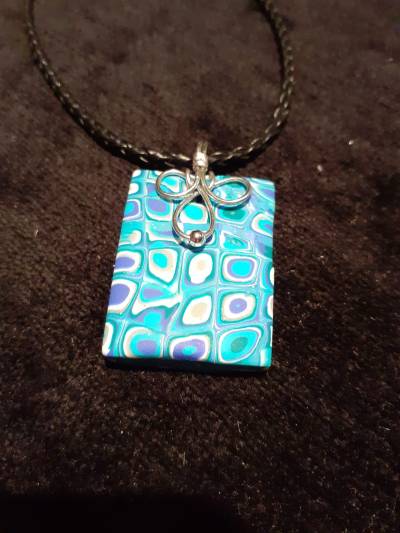 I had used my WI bursary money to learn the craft and pass on the skill to others – money well spent I would say.  Thank you Bognor Regis WI.
Jan Marsden 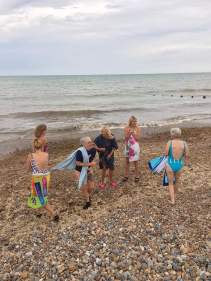 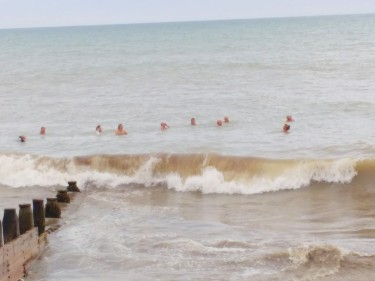 After the hottest day of the year, it was a bit of a disappointment and worry when the weather changed the next day and rain was forecast. As we walked down the prom to Gina’s house the sea didn’t look too inviting, BUT we are WI and, in true WI fashion, we strode out of Gina’s back garden in our costumes and on to the beach. 10 members and 2 guests braved the waves and seaweed and swam. Other members watched!! Once you were in, it was lovely and we even had our first attempt at synchronised swimming. Sadly no photos of that….I blame the members watching.

After the swim (only wimps paddle) it was back to Gina’s garden for Pimms, and more Pimms. A great time was had by all and, thanks to the rain gods who kept the rain at bay. Biggest thanks to Gina for her hospitality….we will be back next year for Fizz and Float.

14 of our WI members built up a collection of 8 knitted twiddle muffs, 2 knitted twiddle mats, 7 fabric twiddle mats and 2 twiddle marble mats on Monday 29th July 2019 for one of our 2019 WI charities – Sage House.   There are more in the pipe line, as some needed a bit more twiddling and fiddling before being ready to add to the pile!

Thank you WI members for helping make the Charity Sew/Knit-In Day fun.   We all laughed, exchanged ideas and skills, and shared tools and fabrics – and of course we had tea and cake.

To see all the photos click here.
Words and photos: Jan Marsden
(…. and lots of thanks to Jan for organising!)

Dinah welcomed Members and (retired) Fire Officer Ken Lloyd on a beautiful Summer’s evening. Ken retold the events of over 30 years ago when Uppark House caught fire, and  fire crews from across Hampshire, West Sussex and Surrey bravely tackled the difficult blaze.  They saved many of the House’s paintings, rugs, tapestries, antiques, chandeliers, china and curtains, despite the difficulty they had in finding a substantial and reliable water supply.

Then Jan Marsden gave us all an account of the recent polymer clay workshop she attended whilst on holiday in the Isles of Scilly, before we all enjoyed refreshments, had the opportunity to buy NFWI raffle tickets, perused the variety of sign-up sheets and competition entries, and enjoyed some social time.

In Gina’s absence, Debbie announced the results of the “what would you save in a fire” competition (judged by Ken Lloyd):

This is an extract from Katie’s record of the meeting. 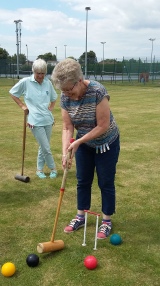 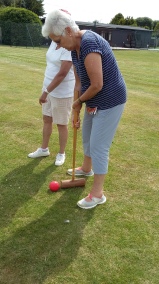 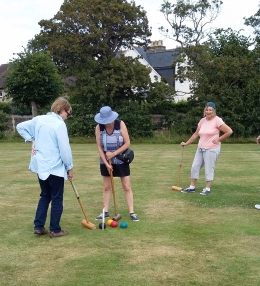 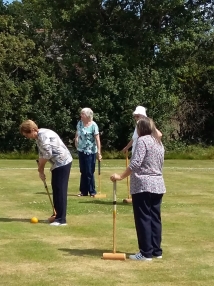 Over the years I have seen people playing croquet and I have always thought it looked easy and a bit boring.  How wrong I was!

Last week I was part of a group trying it out at Bognor Regis Croquet Club, aided by two kind and patient ladies from Westergate WI.

However, over two games we all definitely improved and I absolutely loved the strategy involved.  We played in pairs and had to be very conscious of where the balls were in relation to the hoop, if necessary knocking an opponent’s ball out of the way, for the sake of our partner – very satisfying! 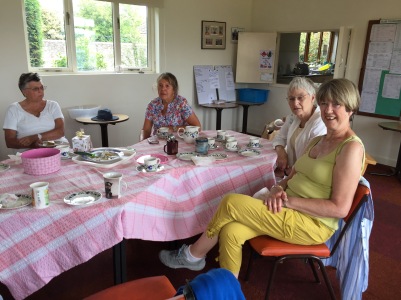 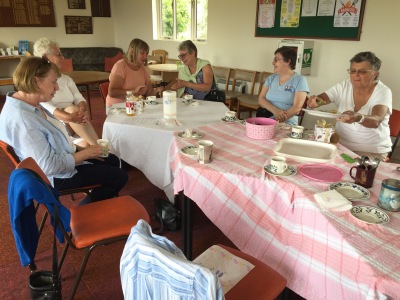 After our games we had a lovely cuppa in the clubhouse with delicious homemade cake.  A great afternoon and one most of us would like to repeat.  Many thanks to Barbara for organising and supplying such a lovely tea. 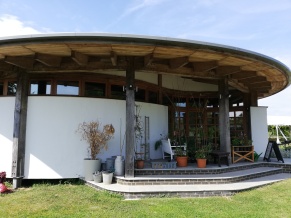 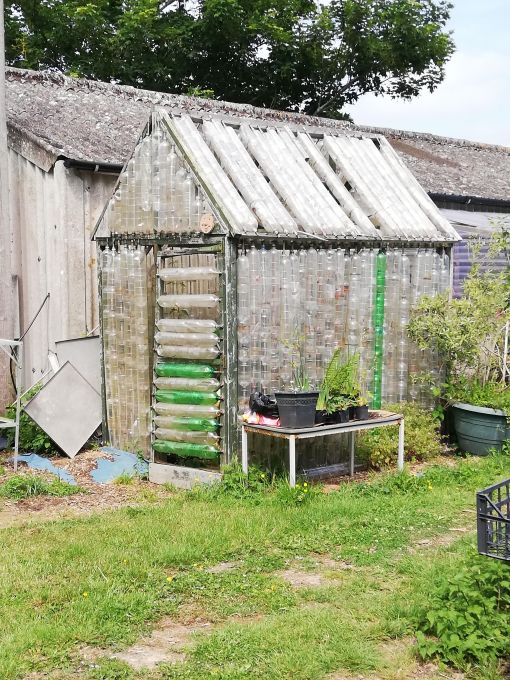 On May 29th a group of us visited this organic smallholding in Southbourne.   Tuppenny Barn provides learning experiences for children and adults to promote organic growing, healthy cooking and eating, and sustainable horticultural practices.

First we had a talk about the history of Tuppenny Barn, then a tour around the grounds, a cream tea, and a visit to the shop.  It was a very interesting and pleasant afternoon.

Many thanks to Dinah for arranging this.

click here to find out more about Tuppenny Barn

and click here for more photos of our visit. 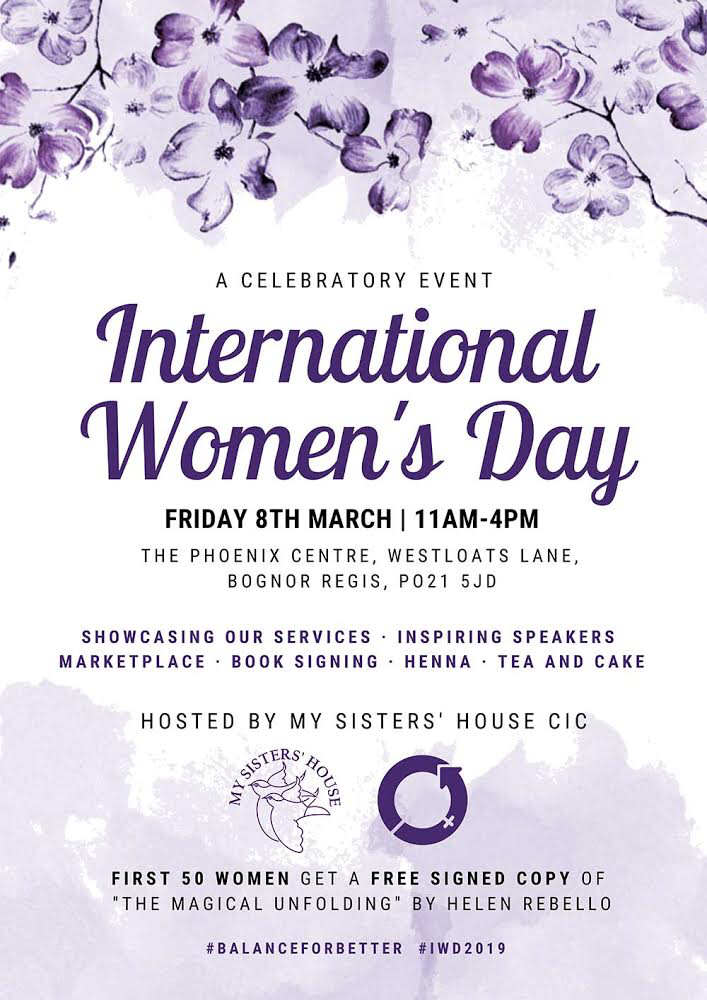 President Dinah Barrand welcomed 44 members (including 6 new members) and 4 visitors to the first meeting of 2019 for BRWI and the first meeting at the new venue, reading a poem which gave a taste of the fabulous meetings, outings, camping trips, lunches, teas and swims for members to look forward to during the year.

Debbie then introduced Tony Harris who, dressed as one of the first class passengers, gave a fascinating talk on the Titanic and its fateful last voyage.  Using evidence gathered from a variety of sources, Tony posited the theory that the Titanic was in fact the Olympic, its sister ship, which had been seriously damaged in a collision while on sea trials. Discovered to be under-insured (like its twin it was deemed to be unsinkable), a plan was hatched to switch the ships and sink the Titanic/Olympic on its maiden voyage which by that time had been heavily over-insured – but no loss of life was anticipated as a ‘rescue’ ship had been commissioned to be close to the Titanic when the accident occurred.  As we now know, the scheme did not go to plan and there were terrible losses – although many members were pleased to hear that the founder of Gordon’s Gin survived!

It was a riveting presentation leaving members having some doubts about their long held views about the Titanic and its fate. Food for thought!

After a vote of thanks from Debbie, Jan and Stella then gave a brief summary of each of the six 2019 resolution suggestions and members were asked to vote for their choice.

The two charities selected by members for this year were announced – Bognor Food Bank and Tangmere Dementia Hub;  these are organisations which provide a much needed service to the local community and to which members can give practical support.

During refreshments, members had the opportunity to sign up for upcoming activities, enjoy some cake and catch up with friends.

After our Treasurer Joyce had given a brief financial report, Gina then announced the ‘Anything Nautical’ competition winners which had been selected by Tony Harris. 1st was Jack, 2nd was Joyce, with Gina coming 3rd.

The Competition Cup was presented to Annie Smith, the overall competition winner of 2018 with Karen 2nd and Sarah 3rd. Congratulations to Annie! Gina reminded members that February’s competition is ‘My Happy Song’.

Rosemary Coleman was also presented with the Best Idea Award (for the monthly coffee morning) having been absent for the presentations at the December meeting.

Members were briefly reminded of particular events for their diaries – the coffee morning hosted by Sarah on 12th February, the camp in Kent on the weekend of 16-18 August, and the forthcoming beach clean organised by Sussex Wildlife Trust.

Finally President Dinah closed the meeting and wished all members and visitors a safe journey home.