On Tuesday 22rd October, the 100th WSFWI Annual Meeting took place at the Assembly Rooms in Worthing. I was delighted to represent Bognor Regis WI as their delegate.

As well as delegates from West Sussex’s 111 WIs, observers from WSF WIs also attended. The Board of Trustees had also invited many special guests in recognition of the importance of this meeting, these guests included the current NFWI Chair Lynne Stubbings, the previous National Chair Janice Langley, Melissa Green the new NFWI General Secretary, as well as Board of Trustee members from neighbouring Federations. In her welcoming address Yvonne Price WSF Chair was delighted to share that also in attendance were many past Chairs of WSF and Federation Treasurers.

The Meeting was opened promptly at 10.45 am with the singing of Jerusalem. After a welcome to members and introductions by West Sussex Federation Chair Yvonne Price; the Mayor of Worthing – Councillor Hazel Thorpe thanked members for their warm welcome. She spoke of the WSF event she had attended earlier in the year, on ‘Plastic Soup’ arranged by the Public Affairs Committee. Councillor Thorpe was deeply affected by messages and information given at this event. This led her to instigating an environmental audit at Worthing Council. The audit highlighted the high use of paper throughout the council and its environmental impact.  Not just paper used for communication and record keeping but the high environmental cost of paper-towels. As they are wet when disposed of, they cannot be recycled – ‘hand dryers are better for the future’. Councillor Thorpe finished her speech by saying: “Where you lead, others will be inspired to follow”. 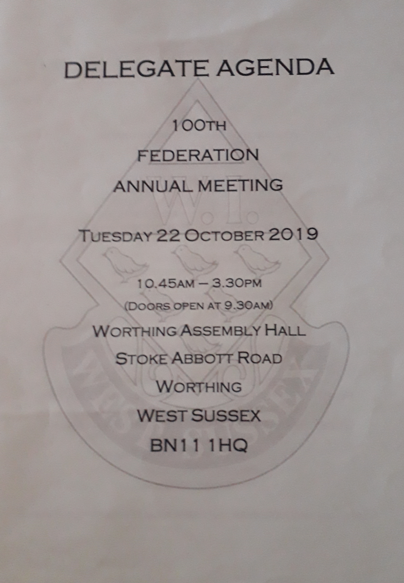 The business section of the meeting then took place. As delegate I voted in accordance with Bognor Regis WI’s wishes, voting for the acceptance of the Record of 2018’s meeting, Adoption of Standing Orders, Appointment of Tellers and Adaption of the Annual Report. A copy of the Annual Report is held by every WIs secretary, so every member has the opportunity to read it.

This was followed by a presentation from our Federation Treasurer Maxine Gregory on the WSF finances from 1st April 2019 to 31stMarch 2019. Maxine displayed the finances clearly via the projector and talked through them.

WSF has a solid financial standing and good membership numbers – but there is always room for more WIs in West Sussex! This financial year has seen an increase of 12% in merchandise sales due to the sale of Centenary merchandise. There was also a O.6% decrease in travel expenses by the Board of Trustees, who are looking at greener ways to travel, such as car sharing when possible. Money has continued to be invested into WSF headquarters – North Lodge, a Grade II listed building for its continued upkeep and maintenance.

It was requested, that if any WI or member has any questions relating to the federation’s finances they should contact Maxine via North Lodge. The Financial Report was then seconded and accepted by the delegates. The report is held by every WIs secretary should members wish to read it.

Yvonne Price then gave the ‘Chairman’s Address’; she spoke of a busy year for WSF – ‘a time of celebration and reflection’. Yvonne had looked into how many other organisations were also celebrating their centenary this year and she was surprised to discover how many were – including: British Airways, Tesco and Pretty Polly. She continued to talk about the many events that had been organised by WSF to celebrate our centenary, and presented flowers to Janice Langley in recognition of the work she had done in organising these events and celebrations.

Yvonne then talked about her passion for the opportunities the WI offered to its members, and to remember that the WI is ‘a listened to voice’. She urged members to let WSF know what events they want to take part in, or to volunteer to be part of a sub-committee and help organise these events.

Yvonne said that we must respond to change, although it can be difficult. WFS are currently looking at a new software system which would enable standardised email addresses for all WSF WIs and to share files. WSF needs members with Digital Skills to help with this, and hopes that members will volunteer by contacting North Lodge.

Yvonne finished by thanking all involved within the Federation Team for their hard work.

The meeting continued by recognising a number of WIs celebrating a special birthday this year, and a certificate was presented to all.

This year’s Calendar Competition attracted over 100 entries, almost double the amount who entered last year. The Calendar Cup was awarded to Diana Hartley whose winning picture can be seen in WSF’s 2020 Calendar. The 2021 calendar competition is Signs in West Sussex.

The County Craft award was then presented to Barbara Foster – a member of Bognor Regis WI! Congratulations Barbara! Please see the recent post on our website for full details of the County Craft Award.

The first guest speaker of the day was introduced…

Al Menzies, a WSF Board of Trustee member is also one of our Federation’s Climate Ambassadors. There are currently only two in WSF and she spoke about the role of the ambassadors and urged a member from each WI to volunteer and take on the role too. Al asked members to think about how they could help the environment, such as the form of transports they use and their diet. She also asked if WIs could think about and take action on ideas locally to bring about change and help our environment. She finished by saying that if every WI in West Sussex planted a tree every year for 10 years, at the end of 10 years we will have planted a forest.

Leaflets were handed out at the AM; if you are interested in finding out more about the role of a Climate Ambassador, please see Debbie our Secretary.

The morning session finished with the second invited speaker of the day, NFWI Chair Lynne Stubbings…

Lynne began by congratulating us all on our Centenary, and spoke about the importance of West Sussex to WI history. From the first WI formed in England at Singleton in 1915, to the formation of the first Sussex Conference – the fore runner to federations, and the first National Chair, Lady Denman came from West Sussex! By 1925 there were 52 WIs in Sussex, all committed to improving life for rural women.

Lynn continued by talking about the WI today – “The WI is a place where women can be themselves and be supported by other women. Membership is diverse – inclusive and progressive.” She encouraged every WI to be the best it could be and for members to take up opportunities – to say ‘YES!’, but most of all be proud of your WI.

She finished with a Q & A session, answering a variety of questions about her WI past and her future plans, and on how the WI can encourage women from minority groups and working women to join.

During the lunch break, members had the opportunity to visit stands, talk to members of the WSF Sub-committees and purchase Centenary merchandise. As a member of the Arts & Craft sub-committee I spent the break talking to members about the County Craft Award. It was delightful to hear so many members voice their admiration for our entries!

The afternoon session of the AM opened with the third invited speaker of the day –Penny Mallory, a former British Ladies’ Champion Rally Driver…

Penny gave a very entertaining talk about her life, work and the many challenges she has set herself. At the age of 6, she decided to be a Rally Driver and despite the fact that at that time there were no women rally drivers and she spent part of her late teens homeless – she did attain her dream. She continued to set herself challenges, rising to meet them and then going above and beyond; after running her first marathon, she said ‘never again’ and then shortly after ran 3 marathons in 3 days in Cornwall for charity.

On discovering she was a descendant of George Mallory – a British explorer and mountaineer who was a leading member of early expeditions to Mount Everest. She decided to try climbing mountains and conquered Mount Kilimanjaro. At the age of 42, she then decided to try boxing; she spent 11 months training to get fight first for her first (and last!) professional fight. Her opponent was half her age, but Penny won her fight.

Then followed a career in television as a presenter for the Channel 4 show – Driven and as a ‘Precision Car Driver’ for TV shows and commercials.

We were then treated to surprise guests – members of The Regis Band performed music from 1919/20, so we could enjoy the music from the time the WI began in West Sussex.

The meeting concluded with the Denman Dip and ‘Betty Merrit’ Draw’s, and the drawing of the raffle (I was delighted to win some fudge!).

After singing the National Anthem, thank you’s to all involved in the day and wishes of safe travels home to all, the meeting was closed.