On Tuesday 23rdOctober I was delighted to represent Bognor Regis WI as their delegate at the 99th WSFWI Annual Meeting at the Assembly Rooms in Worthing.

A delegate from all 113 West Sussex WIs was invited attend. Observers from WIs from across West Sussex Federation, and invited guests from neighbouring Federations meant the meeting was well attended.

In delightful WI tradition the doors opened over an hour before the start of the meeting giving members the opportunity to catch up with friends from WIs across the county, get a cup of tea, buy a raffle ticket and SHOP!

There was a fantastic array of West Sussex Centenary Merchandise available to buy from a badge, pen, china mug to an eco-friendly tote bag! 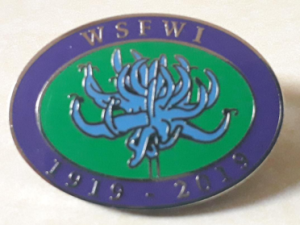 The centenary badge – which will only be available to purchase during the Centenary year- depicts a blue campion the ‘Pride of Sussex’ which can be found all over the South Downs. If you weren’t at the AM don’t worry, these items will be available to buy at all West Sussex Federation Centenary events in 2019.

The Meeting was opened promptly at 10.45 am with the singing of Jerusalem. After a welcome and introductions by West Sussex Federation Chair Yvonne Price; the Mayor of Worthing – Paul Baker offered his welcome and good wishes to the meeting. He spoke of all the organisations and charities he has met during his time as Mayor, the importance of volunteers and not forgetting that volunteering is a two way deal – what does the volunteer get out of it.

After the introduction the Business part of the meeting took place. As delegate I voted in accordance with Bognor Regis WI’s wishes, voting for the acceptance of the Record of 2017, Adoption of Standing Orders, Appointment of Tellers and Adaption of the Annual Report.

This was followed by a presentation from our Federation Treasurer Janet Melvin on the WSF finances. She was pleased to announce that this year there was an excess of income over expenditure, and that there had been no need to use any reserves. Sub-committee organised events had been well attended and generate income for the Federation. The 300 Club continues to be well supported by members with 50% of income used as prizes.

There was expenditure on North Lodge, our West Sussex Federation Headquarters but this was expected, as it is a Grade II listed building. This year money has been spent to keep it warm and dry and repair a collapsed drain.

West Sussex continues to have a healthy membership, and finances are sound. The WSF auditors were proposed and agreed for the next financial year. Any questions regarding WSF finances can be sent in writing to the Federation Treasurer at North Lodge.

Thanks and flowers were then given to Janet who, after many years of service, is stepping down as a Trustee and as Federation Treasurer.

The address by our Federation Chairman, Yvonne Price, then followed. Yvonne spoke of a busy year tinged with sadness due to the loss of a much loved Board of Trustee member Hazel and recently the head of the stewards – Ann.

Yvonne continue to speak about how passionate she is about the WI and the opportunities it can offer – “The WI is rich in history, has a high profile and belongs to us as members.”

She thanked the WSF sub-committees for providing a wide range of events for members to attend; and encouraged members to attend ‘Meet the Team’ Events when they come to their area of West Sussex in 2019. She urged members to “be inspired by what you attend and get involved further.”

During the Centenary Year WSF will continue to develop as a Federation and to try and meet member’s expectations. In 2019 the common goal is to celebrate the past and look to the future.

There were 50 entries this year for the West Sussex Calendar Competition, and this year the cup was awarded to Emma Temple.

The Betty Merritt Bursary Draw was won by Rebecca from Linfield Afternoon WI.

The first guest speaker of the day was introduced… 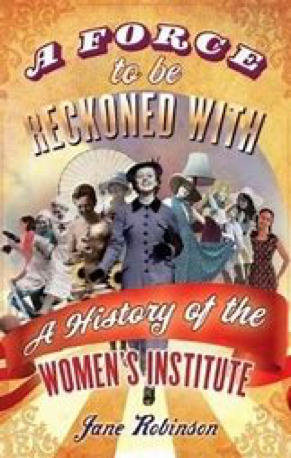 Jane described herself as a collector of books and has spent 10 years in the book trade. She is a writer and lecturer, and is proud of her connection to the WI as she wrote A Force to be Reckoned With – A History of the Women’s Institute in 2011.

Jane had come to speak specifically about her latest work Hearts and Minds – The untold Story of the Great Pilgrimage & how Women won the Vote which has just been published.

Jane spoke passionately about ‘Votes for Women’, how its history has been over stereotyped. Only a few of the many campaigners were Suffragettes but they received the most publicity, and were noted by the media of the time and in our modern times. The Suffragists were just as determined, and were the founders of mass peaceful protest but they are not as well known or remembered. Their colours of Ruby Red and Green are not seen as symbols of suffrage but everyone knows and recognises the Green, White and Purple of the Suffragettes.

In 1913 there was a Great Pilgrimage that lasted six weeks, with women, men and children travelling hundreds of miles – often on foot from towns all over England and culminated in a huge rally of 50,000 people at Hyde Park in London.  Suffragists sort political influence, in particular they saw the social problems in their communities – and wanted the vote, and therefore a voice for a better world.

This was a fact filled, informative talk – that was well received by the audience and led to much conversation during lunch.

Lady Emma spoke to us about her home – Parham House and her year as High Sherriff of West Sussex. Lady Emma is the great great niece of Lady Denman, the first National Chair of the WI.

Lady Emma gave a very information talk about the history of Parham House, its many owners and how this Elizabethan House finally came to be owned by her family. She spoke about its important role during World War II and how it was saved, unlike many large estates at that time, by opening up to visitors – which continues today. Parham Hall continues to be visited by those interested in it’s history, art collection and beautiful gardens.

Then followed a presentation from Janice Langley about West Sussex Federation’s Centenary Plans. A number of varied events are planned around West Sussex during 2019 and details will be sent to all WIs.

Janice encourage members to assist with positive and exciting press coverage during 2019, and a reminder that WIs can send details of their events to the Board to be added to WSF Facebook Page.

Yvonne then announced the results of the election for the 2018-20 Board of Trustee – congratulations to our own Jan Marsden who was re-elected to the Board and is one of two Vice-Chairman of our Federation.

The meeting ended with the singing of the National Anthem and members were wished a safe journey home.

As always the AM was well run and extremely enjoyable; and I urge members to attend next year’s Centenary Annual Meeting.