The meeting opened at 10.45am in the WI’s traditional way with the singing of Jerusalem. Yvonne Price, WSF Chairman, then welcomed the newly elected National Chair – Lynne Stubbings, the previous National Chair Janice Langley, invited guests from neighbouring Federations, WI delegates and observers. Everyone was then warmly welcomed by Alex Harman the Mayor of Worthing, who was astonished at the ‘sheer number of attendees’ and ‘wished us all a good day’.

The meeting then progressed with the business matters, the WSF Annual Report was adopted and the Accounts were presented by the Federation’s Honorary Treasurer, Janet Melvin. Membership within West Sussex is up, however unexpected repair work to the roof of the Federation office – North Lodge (a Grade II listed building) meant there was an unexpected deficit in the finances. Sub-committee’s continue to generate income, as does the 300 club. Overall the WSF Finances are sound. The Financial report was proposed and accepted.

West Sussex Federation now has a Facebook page – our ‘shop window’ and WIs are encouraged to follow it and share any events they are involved in.

Yvonne thanked everyone for their on-going support.

The first guest speaker of the day was then welcomed to the stage – Anne Stamper, a previous Chairman of East Sussex Federation, an ex-NFWI Trustee, and she has recently retired as National Archivist for NFWI. Anne gave an incredibly detailed and informative talk about the history of the first WI Federation – Sussex, known as the Sussex Conference, and all without notes!

After the first WI in England, Singleton and East Dean WI was established in 1915, other WIs were set up within Sussex. By 1917 there were 8 Sussex WIs and they wanted to meet together – and so the first Sussex Conference was held; they discussed general aims and guidelines for Sussex WIs –this included increasing and conserving the food supply. It was also decided that the conference would meet twice a year and would help new WIs establish.

By the third conference in 1918 there were 50 Sussex WIs, and it was agreed the name would be changed to ‘Sussex Federation of Women’s Institutes’. WIs were asked for an affiliation fee of 2p, so that an office could be rented and a secretary employed. 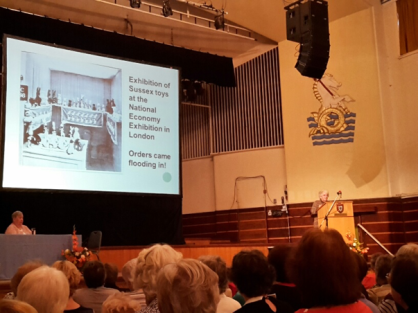 A total of six Sussex conferences were held between 1917 and December 1919. Many of the traditions the WI is well known for, including WI competitions, the tea rota and the taking of minutes came from these! In December 1919 it was proposed that the Sussex Conference should split and so, East and West Sussex Federations were formed.

Anne’s book Sussex – Cradle of the WI. The Sussex Conference 1917-1919 gives a full history and is now part of Bognor Regis WI’s archives, if you want to know more about the history of the First Federation.

The first speaker of the afternoon was the newly elected NFWI Chair Lynne Stubbings.  She had brought a key with her that she had been given on her 21st birthday and used it to illustrate how the WI was her ‘key of life’. Lynne has been a member of the WI for 38 years, her very first meeting was an Annual Meeting but it didn’t put her off. She quickly became involved – joining the committee, she then became involved with her federation – 8 years ago she was co-opted to the NFWI Board of Trustees where she helped to set up the Moodle, amongst many other achievements.

She discussed the challenges ahead for the WI: making it relevant to today’s members – embracing new technology and forms of communication, and finding ways to involve busy women to secure the future of the WI… ‘the WI is always advancing and changing – as it should’.

She encouraged us all to use our key and open the door to all the WI has to offer.

The last speaker of the day was Dame Stella Rimington, the first woman Director General of MI5 and the first to be publicly named. ‘Change’ was the theme of her career. Her generation of women were not expected to have a career, she did work as an archivist before she was married but, as a Diplomat’s Wife, she travelled to India with her husband and was not allowed to work. However, she ended up being recruited by MI5 as a part time clerk typist. It was an interesting time – during the Cold War and many of those around her were watching each other. When her husband returned home she did too, so her job ended.  Once back in the UK she went to MI5 to ask for a job. She started as an Assistant Officer Grade; there was a two grade structure – all the men were officers, all the women were assistant officers – no opportunities for women to advance. However sex discrimination legislation meant that she and fellow female colleagues could start a quiet revolution. She was the first woman to be taught how to use ‘human sources’. There were no family friendly policies, no job share, no part-time hours – her job was and could be 24hrs, 7 days a week. Terrorism changed how information was collected and used – this led to new ways of working, and women prospered.

Dame Rimington was promoted to Director of Counter Terrorism and then Director General. She started a campaign of ‘greater openness’ at MI5, educating the public about what the security/intelligence services do. She retired 4 years later, decided to write and is now a successful author of a book series – about MI5!

The Annual Meeting closed with the singing of the National Anthem.

I had a very enjoyable day as delegate for Bognor Regis WI, thank you BRWI for giving me the opportunity to hear three truly inspiring women,